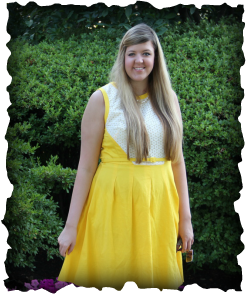 As a shy, awkward ten year old, Hannah Hindman never thought she could endure being on stage in front of a crowd.  As Kudzu Playhouse’s 2013 scholarship winner, she has not only proven her younger self wrong, but by pushing herself and not giving in to the shyness she says she has become a better person with aspirations she never conceived possible.

Kudzu’s scholarship program traditionally provides one scholarship each year to a local youth, and while the primary criteria for the award is involvement in Kudzu Playhouse productions, fundraising and promotion – students are also evaluated on other accomplishments or activities including non-Kudzu theater/performance experience, academic achievement, leadership, and community service. Hindman’s accomplishments fit the bill on all accounts, but it was in her personal essay where she summarized how theatre has changed her life that the scholarship review committee and Kudzu board members were reminded why their organization remains committed to this community and area youths.

“I was never your typical stage kid; I was exceedingly shy and hated talking to people,” says Hindman in her essay. “It was a struggle for me just to say hello, much less get in front of hundreds of people and sing and dance.”  Working with directors and being forced to step out of her box, Hindman eventually learned to become not just a better actor, but a better person.  With each successive role, her confidence continued to grow and she went from ensemble to featured roles – walking and squawking like a goose, running around like a lunatic with a Marge Simpson-style wig atop her head – to eventually earning a Northwest Mississippi Theatre Alliance “Allie” Award nomination for her portrayal of one of the stepsisters in Kudzu’s 2012 production of Cinderella. “Public speaking is not a problem for me anymore,” says Hindman. “Speaking my mind is no longer something I shy away from.  Being shy is not an option now, when it was the only option for me eight years ago.”  She gives thanks to the individuals at Kudzu and their culture of acceptance, compassion and encouragement for helping her make this life-changing journey.

A 2013 honors graduate of DeSoto Central High School, Hindman is enrolled as a vocal performance major at Northwest Mississippi Community College, where she begins classes this fall.  An accomplished singer and guitarist, her dream is to someday perform on Broadway and do voice overs for Disney.