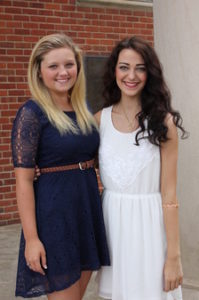 In response to the growing interest in, and support of, the performing arts in our community, in 2015 Kudzu formally expanded its scholarship program to provide two annual awards to local youths, naming one in honor of a long-time Kudzu supporter. While the primary criteria for both awards is involvement in Kudzu Playhouse productions, fundraising and promotion – students are also evaluated on other accomplishments or activities including non-Kudzu theater/performance experience, academic achievement, leadership, and community service. Both awards are designed to help young thespians further their educational goals.

The 2015 winners of both awards each have a deep-rooted love for theatre and have mapped out ambitious plans to make performing their life’s work. Kudzu Playhouse is proud to support both of these talented young women as they pursue their dreams.

The Kudzu Playhouse Scholarship Award recognizes a student whose participation in the arts has affected significant personal growth in areas such as performance skills, technical skills, public speaking, self-confidence / esteem, or an appreciation of literature and the performing arts.

The 2015 Kudzu Playhouse Scholarship Award recipient is Lexie Lang, daughter of Rick and Suzanne Lang and a senior at Hernando High School. Lang credits her participation in theatre with helping her find who she truly is and what she wants to do with her life. Says Lang, “Although theatre is all about opening yourself up to the world and performing for others, there is also something deeply personal found in each actor’s performance; a reason that they’re doing this for not just the community, but for themselves.” Lang has appeared in more than 30 theatrical productions and has been recognized with several Allie Award nominations as well as MTA, debate, poetry and monologue competition honors. Lang has been accepted into the Young Americans College of the Performing Arts in Corona, California, a conservatory style program of study for students who wish to combine intensive performing arts training with experiences that broaden understanding of the global community.

The Jim Anderson Legacy Scholarship Award is dedicated in honor of a longtime supporter of the arts in DeSoto County, and specifically Kudzu Playhouse. The award recognizes a student who understands the importance of maintaining and supporting arts programs in our community and/or schools and has demonstrated a commitment to maintaining and supporting these programs through participation in a variety of live performance activities.

The 2015 Jim Anderson Legacy Scholarship Award recipient is Erica Peninger, daughter of Kim Peninger and a senior at Lewisburg High School. Peninger has participated in more than 30 live theatrical productions throughout the Mid-South and has been recognized with numerous nominations and awards for her portrayal of a wide variety of characters. Says Peninger, “I believe that it is important that all kids have the opportunity to delve into whatever artistic medium they wish so that they too can find themselves in their work.” Peninger plans to attend the University of Memphis and pursue a degree in Musical Theatre. She will travel to New York City in June to compete nationally in the Jimmy Awards held at the Minskoff Theatre on Broadway as part of the National High School Musical Theatre Awards program.