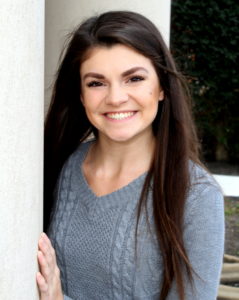 The 2017 Kudzu Playhouse Heritage Scholarship Award recipient is Collyn Taylor, son of James and Joi Taylor and a 2017 graduate of Hernando High School. A native of Hernando, Collyn has been performing since the day she was born and takes every opportunity to dance, sing and act. She began formal dance training at the age of two and enjoys ballet, pointe, jazz, tap, and modern. Collyn’s theatrical career began when she was eight years old with Kidzu Playhouse, and she has appeared in more than 40 productions, the majority of them with Kudzu Playhouse. She has also served as choreographer for Hairspray as well as for several years of summer camps. Collyn is currently pursuing a BFA in dance with a theater minor at The University of Southern Mississippi, with the ultimate goal of having a career on Broadway.

“I have loved being in front of an audience ever since I first stepped on stage,” says Collyn. “The sudden rush of excitement and emotion from performing is indescribable. While I love the costumes and makeup, my favorite part of live theatre is telling a story. One of the most valuable things I have been taught is that a good performer strives to move the audience – to make them feel as if they are part of the show. I have been fortunate to participate in many different productions, both on stage and behind the scenes and I have been blessed by the many successes and opportunities I have received. I give tremendous credit to my experience in theater for helping me to be well-prepared and brave enough to even consider attempting some of them. I look forward, with great anticipation, to see what my future holds.”